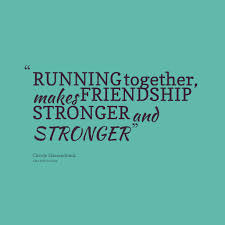 I run because it’s my passion, and not just a sport.  Every time I walk out the door, I know why I’m going where I’m going and I’m already focused on that special place where I find my peace and solitude.  Running, to me, is more than just a physical exercise… it’s a consistent reward for victory!

The reason we race isn’t so much to beat each other… but to be with each other.

You have to wonder at times what you’re doing out there. Over the years, I’ve given myself a thousand reasons to keep running, but it always comes back to where it started. It comes down to self-satisfaction and a sense of achievement.

Believe that you can run farther or faster. Believe that you’re young enough, old enough, strong enough, and so on to accomplish everything you want to do. Don’t let worn-out beliefs stop you from moving beyond yourself.

I’ve officially hit the wall. And it isn’t pretty.

One thought on “running quotes”