In the midst of the holiday madness, I’ve been doing my best to keep it together. As if life isn’t busy enough January through November, the holidays certainly throw everything into high gear. As I write this, I’m planning on a 5 a.m. wake up so I can run, work, and then fit in a holiday party and concert. Plus, I still have shopping to complete, and then cookies to make for a work party the next day. Isn’t this supposed to be the “most wonderful time of the year?”

The fact of the matter is, it IS the most wonderful time of the year, but we tend to forget this when all we are doing is running around… and I’m not talking in a Runnerchica 10 mile run kind of a way.  Take one look around any grocery store or shopping mall, and you’ll see faces of people who may be physically in one place, but their minds are definitely scattered in many directions.

There’s a problem with this. A big problem that was very evident yesterday, when I mistakenly showed up at a doctor’s appointment one hour early.  After applauding my promptness, the nice receptionist suggested I go to a nearby mall instead of staying in the waiting room.  Happy to be gifted this time, I stopped at a strip mall to run an errand.  As I left the store, I witnessed an SUV backing into my car. THIS was definitely not on my list of things to do. I didn’t have time for this! As I walked to my car, I wondered what the driver would do- speed off, or stop? Luckily, he  got out of the car.  As I approached him, it was obvious that this mishap had thrown a wrench in his busy schedule as well. He apologized, and then proceeded to get the insurance info together. Remarkably, I remained very calm- I was more worried at that point about making it back to my doctor’s appointment and then shopping, than the dent that now graced my back fender.  I guess you’d call that a case of holiday shock. 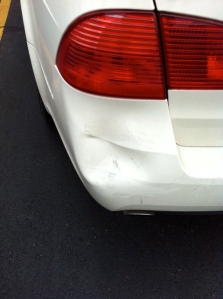 Maybe ten minutes later, after the man and I had exchanged all of the necessary info, he told me that actually he considered this a “wake up call” for him to slow down.  It turns out that he also had been running around like crazy, going in a million different directions.  I told him I whole heartedly agreed; that things like this were actually GOOD because they caused us to pause and stop, perhaps preventing more serious accidents that might happen if we continued to be so distracted.

This incident also reminded me to slow down and remember that a good holiday isn’t measured by the things we get at the mall, the cookies we bake, or how clean our houses are for company.  When it comes down to it, all of those things are about as important (or not important) as a dented bumper.

So, as we wind down this holiday season, perhaps with many things still on our lists… I invite you all to pause. Slow down as if you are at mile 25 of a marathon, the point where you equally want the end to come and not come, where everything slows down and you just soak in the scenery around you. Slow down enough in these last frantic days so you can clearly see those around you, the people who mean the most.  They are like the fans on the sideline who cheer us on, but we only notice them when we pause long enough to really look at them. Your fans- your family and friends- are the things that make this holiday season worthwhile.