“The greatest barrier to success is the fear of failure.”  – Sven Goran Eriksson

I ran into an old friend the other day, and we spent some time sharing “status updates” on mutual connections.  One of those connections, a “serial entrepreneur” was the topic of discussion.  This guy has had several businesses over the years, many that were very successful, others that flopped.  However, regardless of how bad the flops were, this guy always, always bounced back with enthusiasm and drive, and ended up in the driver’s seat again.  It’s actually pretty amazing.  My friend told me about “Ted’s”  latest venture; a long shot of an idea that most people would consider crazy. But, my friend assured me, “Crazy as it is, you know that even if this idea doesn’t work, Ted will be okay,  because he always finishes ahead.” My friend went on, “No matter what…he always fails forward.”

Fail forward. What a great concept to describe my friend, and an interesting concept to consider. It made me think of a certain pose in yoga (see below) in which the yogi must reach forward with one arm and kick back with the back leg.  The harder one kicks, the longer he or she can balance in this pose. You really have to work it to get in this pose, and, as the instructor says, “If you are going to fall (fail), fall forward.”  Basically, if you’re falling sideways or backwards, you’re not trying hard enough. Falling forward is actually a good thing because it shows you that are giving your all to that particular pose.  And if you do fall out, no worries!  The instructor often reminds us, “If you fall out, just get right back into it.” 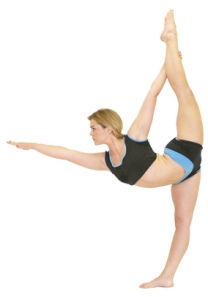 As a final example of “failing forward” let’s examine a recent race I ran, the Rock and Sole Half Marathon and 10K. This inaugural event began at 8:00 a.m., on a day where the heat index approached 100.  6500 runners participated in the run which took runners on a toasty (understatement) trek over a bridge and back, and through a course with much sun and little shade.  Unfortunately, as with most inaugural events, mistakes were made- at least 50 runners suffered ill effects from the heat and the course’s insufficient amount of water and first aid assistance.  Definitely not a good combination on a day that’s dangerously hot to begin with.  Well, as can be expected, many runners were not happy with the above. Their reviews of the race went something like, “How can you not have enough water at a race in July?” “Who doesn’t plan for WATER?”

Facebook and local blogs were ABUZZ with anger towards the race director.  Now, I completely understand the backlash, and agree that these things should have been at the top of the checklist for a successful race.  While not excusing it, the fact that it was an inaugural race could have contributed to this oversight. Yet, I think the real story lies in what happened afterwards. The race director responded to the backlash by taking full responsibility for the mistakes he made.  He didn’t give excuses, he gave apologies and acknowledged that he screwed up.  He also promised that if given the opportunity again, these mistakes would be corrected.  Later in the week, the sponsoring organization sent an email to participants offering partial refunds on this year’s event, and discounts on next year’s event.  All involved promised that every aspect of the race would be analyzed so that they could learn from their mistakes, especially those that had caused people to fall ill (a failure that’s never acceptable!).

So, while this year’s run definitely failed in many important areas, I would not say it was a complete failure.   That kind of failure is what happens when you fail to go for it, fail to learn from mistakes, and fail to try again next time. These guys didn’t fail- they went for it by trying a new event, taking responsibility for their mistakes, and vowing to give it a go again next year, pledging they’d make it better.

When it comes down to it, failing forward might be my new motto. It’s certainly better than fearing failure altogether, and getting nowhere.  Imperfect outcomes show us that while our efforts may not be 100% successful, we are at least doing things in this lifetime. We’re actually moving forward, regardless of whether the outcome is as we expected or not.  And I’d take moving forward to staying in the same spot any day of the week.  It’s not that tough to do either, all it takes is one foot in front of the other.

Try it, friends… you just might find it gets you places.